This week, constructions crews are painting and removing signs and awnings and two Castro businesses closed making way for the new Gus Van Sant film “MILK”. (Read more about the film at towleroad and the Bay Area Reporter)

Over the next few weeks we’ll be posting updates and photos. Here’s the first batch: 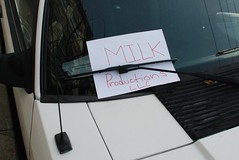 Parking on part of Castro St. is limited to the film crew

First American Title closed shop late last year and now is serving as the office for the film crew and the home furnishing store “given” has closed until Spring. “given” occupied the space that was Harvey Milk’s camera shop and where he held his neighborhood political meetings. 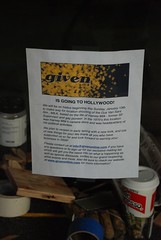 “given” tells its customers about the closure 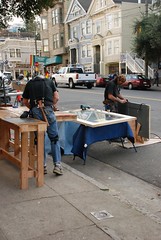 Construction crews outside of Harvey’s shop 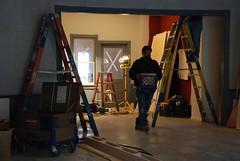 Construction is already far along, the store looked quite different only a few days ago.
There was a wall where there is now an opening between the ladders and the walls have been covered with a new soft tile surface.

The Castro Theatre is also getting a makeover. The theatre has been a bland tan color for as long as we can remember. The film has prompted the theatre to restore the paint job to it’s 1970s glory and highly colorful palette. 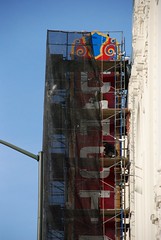 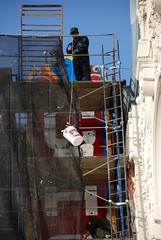 We’ll be sure to grab more pictures as the neighborhood continues to put on its costume for the film. And, of course, we’ll try to snap a few shots of Sean Penn, Josh Brolin, James Franco, Emile Hirsch and the rest of the cast.