Olympic athlete Gus Kenworthy has been enjoying a vacation in beautiful Greece this week. Instagram postings have shown him at a couple of Greek Islands, enjoying the sea and sunshine.

The first posting showed him on a clifftop on the islands of Milos. If you swipe left, you’ll see videos of him jumping from the cliff into the sea. The heart-stopping videos show him appearing to narrowly miss the cliff edge that juts out beneath him.

In a second batch of photos, he’s on the Greek island of Sifnos. These photos include a male companion, but Kenworthy doesn’t name or tag him.

One of the photos shows shadows of the two men on the ground. They may or may not be holding hands.

Kenworthy captioned the photos, “Alexa, play “Summer Lovin’” from the musical Greece!” This led some of his followers to speculate whether the man is a new love interest, and keen to know the friend’s identity.

Romantic interest or not, we hope Kenworthy and his pal are enjoying the Greek islands, which are stunning at any time of year but particularly in late summer when the heat has dropped slightly.

Once the vacation is over, Kenworthy, a freestyle skier who came out as gay in 2015, is likely to be back training on the slopes. In 2019, he announced he was switching from Team USA to Team GB to hopefully compete in the 2022 Winter Olympics in Beijing (Kenworthy’s mother is British and he was born in Essex).

Related: Gus Kenworthy switches from team US to Great Britain for 2022 Olympics 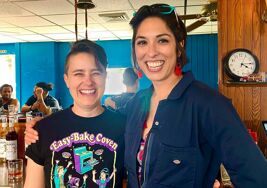