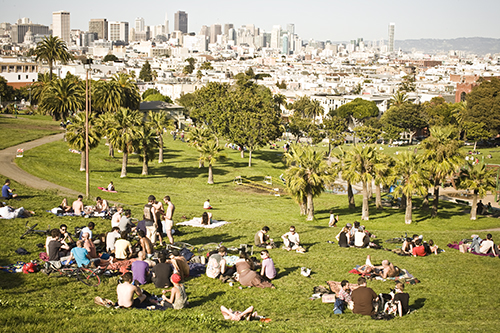 As parts of the world become less heteronormative, the need for Gay (with a capital “G”) spaces is arguably diminished. The “gay experience” isn’t as relegated to strictly “gay places” as say, the 1950s, when mainstream culture and the book of the law were none too warm to our ilk, forcing us to congregate in secret. Yet there remains a force that bands us together, increasingly less about sexuality and more about finding community in those who celebrate and express their differences.

We hold onto these spaces to remember where we’ve been, not as museums preserving dusty artifacts but as living continuums to celebrate the present and propel us forward. There are gay places to celebrate wildly, to laugh uncontrollably, to cruise, to mourn, to pray, to eat shitty food and above all else to be unapologetically true to self.

By no means a comprehensive list, here are 19 gay places around the world not to miss in 2014–or whenever you get the chance before Father Time makes it difficult or impossible.

What would you add?

Who would we be if we didn’t kick off the list with The Stonewall Inn bar in New York City’s West Village? The bar itself, in all honesty, isn’t much to look at. But the space is hallowed homosexual ground, widely considered the birthplace of the modern gay rights movement. After you down a vodka and take a minute to imagine the iconic events of that fateful Summer night in ’69, head directly across the street to check out George Segal’s aptly titled 1980 “Gay Liberation” statues.

While Stonewall has (rightfully) been ironed into gay history, lesser-known Julius’ bar deserves to be right there with it. Just around the corner from its more famous cousin, Julius’ is the oldest continuously operating gay bar in New York City and the site of the 1966 “Sip-In,” when the Mattachine Society protested a law banning alcohol sales to homosexuals. The group won a pivotal court battle granting gays the right to peaceful assembly, and thus paved the way for the modern “gay bar” to exist. Without the Sip-In, Stonewall would never have opened its doors.

The completely over-the-top home of Gianni Versace in Miami, Florida operated until recently as a luxury boutique hotel, and though a one night stay may have overloaded your senses to the point that you ran home to redecorate in all postmodern minimalism, it would have been worth it. The site also has its share of lore–the Italian designer was gunned down on the steps to the palatial estate by serial killer Andrew Cunanan.

The fate of the home remains undetermined.

Yes, Amsterdam is a good time. But before you rush to the cafes seeking anything but caffeine, take a moment to count your blessings at the Homomonument. In Amsterdam’s center, three large pink triangles form the tips of one one even larger triangle to commemorate all who have been persecuted because of their homosexuality. It’s also the first monument to specifically honor gays and lesbians lost in the Holocaust. A sober but important reminder of past and current struggles.

Since being gay is (thank goddess) just as much about celebrating our present as it is about remembering our past, Sydney Mardi Gras will lighten even the most somber of moods. Attended by hundreds of thousands of Australians and travelers, the bash is a full week of extravagant events from massive parades to posh parties. You’ll find drag queens galore, sexy men and women form all over the world and enough excitement to last a year in the glorious February Summer of Sydney.

One of the first great poets to craft a distinct American style, Walt Whitman continues to be a role model for gay artists and poetry lovers. If you haven’t read “Leaves of Grass” anthology, published (in its first iteration) in 1855 and publicly berated for (among other things) its mentions of earthy homosexuality, it might be time. His tomb in Camden, New Jersey is a place to pay homage to the famous wit who defied the times and helped lay down the foundation for liberty and visibility.

Speaking of pioneers for gay visibility, a trip to San Francisco isn’t complete without a stop at the site of Harvey Milk’s camera shop on Castro St. Though the store itself is long gone, 575 Castro remains an important gay landmark. It’s currently (and appropriately) an “Action Center” and retail outlet of the Human Rights Campaign, where you can get the latest info on the organization’s work and shop for merchandise featuring the signature blue-and-yellow equal sign.

Voted the Ultimate Dream City in Best of GayCities, 2012, Paris is still the quintessential city of romance. Everyone should have the chance at least once to meander the boulevards hand-in-hand with a lover, taking breaks only for passionate affection and the occasional espresso. Of course, we’ve also heard the Grindr scene ain’t half bad.

Andy Warhol was gayer than Christmas and not afraid to let it be known, even when mainstream culture wasn’t exactly warm to the idea. A trip to Pittsburgh should definitely include a visit to this seven-floor behemoth of a monument to one of the most famous and infamous names in modern art. Warhol’s famous pop portraits are just as much about the public’s perception of celebrity as they are about celebrity itself–a lesson any Kardashian fan could still do well to glean a little something from.

Gone are the days when you could cruise a steam room, dance your heart out and catch Bette Midler perform with Barry Mannilow all without having to change venue (fyi, the answer to that riddle is Continental Baths in NYC in the early 70s). The bathhouse scene has gone through quite a few iterations, from clandestine refuge for society’s “perverts” to hedonistic wonderlands of gay liberation to hotbeds for hard drugs and STDs. What it hasn’t done, however, is disappear. And they aren’t all created equally, either. L’Oasis Sauna in Brussels is about as classy as they come.

In Downtown Los Angeles, the Biltmore Hotel is a gorgeous reminder of the old-school glamor of the 1920s. And while a trip to the fittingly stunning Gallery Bar and Cognac Room within the hotel will often include an arched neck and a question starting with “Isn’t that…?!”, it’ll also be a trip through LA’s homo history. The bar was one of the first places in the city to allow gays to openly congregate, and nearby Pershing Square remained a well-known gay stomping ground through the 50s and 60s.

Whether or not it’s your particular blend of tea, gays have always been prominent, forward-thinking players in the world of fashion and design. And there’s no better place to admire the latest trends than Tokyo’s Ginza district. Translating to “Silver Mint”, Ginza will do more than satiate your hunger for couture. Every weekend the streets are closed off to cars, leaving pedestrians free to graze this fashionista paradise. Many of the stores themselves are art pieces in their own right, and there’s plenty to admire. You may want to leave your credit cards at home.

Located in the heart of London’s very gay Soho district, you might think this British chain restaurant an odd choice to make the list. But every weekend come 4am as intoxicated club goers stumble out of their respective pleasure dens, Balans fills up with the liveliest bunch of grease seekers west of the Channel. Believe us, it is a sight to be seen. Tip: the Mexican breakfast burrito is the perfect antidote to a night of sin.

There are incredible gay parks and beaches all over the world, but none quite as charming as San Francisco‘s Dolores Park. The gay section is located in the southwest corner by 20th and Church, which happens to boast the best city views (coincidence? we think not). On hot weekend days the grass fills up with sunbathing gays in all manners of undress drinking champaign and bouncing from group to group. The vibe is loose and free; if you can’t have a great time here, you should just give up now.

We owe a lot to Athens, the ancient birthplace not just of Western culture, but indeed of gay culture itself. Scholars note that homosexual relationships were practiced with official sanction in many facets of the society from the 7th century BC through the Roman era. Any history buff will love wandering the ancient streets pondering what life was like for gays way back when. Of course the history books aren’t free of controversy–relationships between adults and adolescents weren’t unheard of (though the practice was much less common than you might think), and bottoming was considered demeaning. Sorry, Houston.

What would this list be without at least one pride to represent? The festivities in Madrid have it all: a picturesque setting that attracts travelers by the hundred-thousands, more events than you could ever hope to attend and an overall convivial spirit of acceptance and celebration. In 2007, Madrid hosted Europride and boasted the largest turnout in the international organization’s history. It will have the chance to defend that title in 2017 when Europride returns to the Spanish capital.

San Francisco is chock-full of gay roots, and the Stud has certainly been around the block and back. A bit of SoMa (that’s “South of Market”) bar history…The Stud opened in 1966 at 11th and Folsom (pictured left), where you’ll now find Holy Cow, and until recently, the very popular gay Honey Soundsystem party. In 1984 it moved to its current location (pictured right) at 9th and Harrison (formerly Club Nine, pictured center) and brought with it its long history of fags, dykes, daddies and queens all meshing into one gorgeous conglomeration. Nowadays you can still catch some of the best drag in the city Friday nights at Something.

Arguably the world’s oldest gay bar, Amsterdam’s Cafe ‘t Mandje is an extraordinary institution opened in 1927 by maverick motorcycle-riding leather-jacketed lesbian Bet van Beeren. Upon her death in 1967, younger sister Margaretha ‘Greet’ van Beeren took it over and ran it until 1982, when the area had taken a turn for the worse. The small and heavily decorated bar lay dormant (but dusted, aired and vacuumed) until 2008, when the sisters’ niece Diana van Laar restored the premises, characterized by old photos, stained-glass windows, souvenirs, stuffed lizards, bear and tiger heads and the like, much of it dangling from the ceiling. It remains a welcoming and local-feeling place to have a drink and maybe hear a wild story or two.

Jerusalem is the holiest city for three of the world’s major religions, and it’s also been steadily moving to the political right over the last decade. That’s why we consider the enduring weekly eleGanza Drag Show a perfect choice to close out our list. In a city where tradition is valued to the extent of nudging out those who don’t fit the mold (the gay scene in Jerusalem has largely been elbowed to Tel Aviv), Mikveh Bar is a Gay place that sends a message just by refusing to budge. Every Monday when the ladies take the stage, they really are lip synching for their lives.